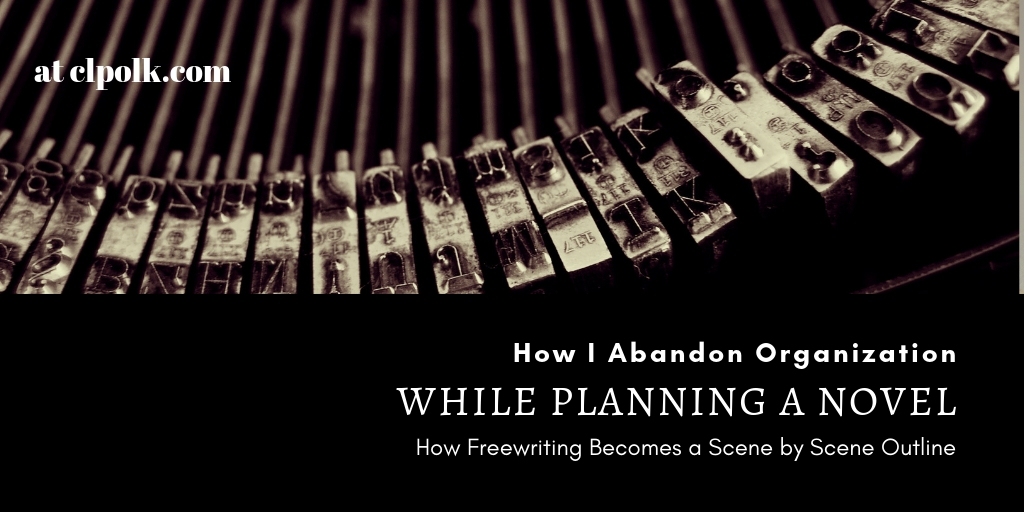 Sometimes people look at my process and say, “that’s so organized, I have no idea how you do this in such a tidy way, I could never do that. How do you do it so neatly?”

The answer is that I don’t try, at first. That organization is the last thing I do, not the first.

At first I just write whatever is crowding my mind. No order, rhyme, nor reason. I type this out in gdocs, mostly, though I have been known to do it longhand in my notebook and then transcribe. I title the file “Everything I Know About the Story” and it is a celebration of structureless, stream of consciousness process. I do whatever excites and interests me the most without shame or apology, allowing myself to be illogical, liberated, and limitless. I keep at it until I exhaust all my ideas. This usually is about 20-30 pages of the most RANDOM NONSENSE. It usually takes me about twenty hours.

Then, after taking a break of 1-3 days (while I fart about on Pinterest building my “visual aesthetic” and building a WIP soundtrack on Spotify) I go back to the document and start making notes. I write expansions, ask questions, make comments. It’s still a mess at this point, so I feel like I can throw anything at it. I still don’t have to know what I’m writing about. I’m still discovering it this fills out ten to twenty hours of work.

Then I start organizing it into a Microsoft One Note Binder, because that’s what I use for my series bible stuff. I will organize things like “characters” and “locations” and “Culture” and file EVERYTHING. I’m still not writing a story – I’m putting the laundry away, so to speak, so I can find my rainbow colored socks when I need them.

While I’m doing that, I start figuring out the story – like, does this society have a rigid class system/social caste? Where are my various characters on the various layers – are they on the come up or the way down? I especially think about characters. Questions like, who are my characters on the inside? What do they want, and who/what do they have to fight to get it? Who knows whom and how do they interact? What are their secrets? What do they regret? What would they never, ever do, say, believe in? And the whole time I’m thinking:

How can I wreck their lives with this information? How do I use this to push them out of their comfortable holding pattern and into the world story? How do they get involved? Why them in particular, and not someone else? How can I make the stakes higher and the situations worse?

Inevitably I’ll get more ideas, some of them as proto-scenes. That’s when I start a Scrivener file–so I can make scene cards for these proto-scenes. I’m starting my outline now, so I’m going to start thinking about what the characters expect will happen, and how those expectations get upended. I’ll think about essential scenes for the kind of story I’m telling, and for the kind of characters that are populating it. I usually wind up with about 15 of those kinds of scenes, and they start shaping themselves into the story I want to tell.

Then I wrack my brains working on major story points – what happens to make the character actively pursue the story goal? What happens in the middle that changes everything? What does the character have to lose, and how will I take it away from them at the darkest moment? What is the final confrontation where the character realizes what they have to sacrifice to get what they really want? What kind of life are they starting after their climactic triumph (or loss?)

This is the beginning of organizing, for me. This is where I stop and say, “okay, how long is this story? Whose story am I telling? How many POV characters have popped up? What are their personal arcs? What do they need to do? “What do they need to do” gets me started on sub-plots. I write these stories about incredibly busy people, who often can’t just drop everything and go on a quest – they have jobs to do, people who depend on them, a pursuit that can’t just be set aside.

So if I’m writing a story about an entomologist who is fighting to have a species of lycaenidae recognized as a unique discovery when suddenly her friend and mentor – a well known but controversial figure in insect migration dies is murdered, she’s not going to forget about her aim to have the credit for discovering Arcas tuneta jayalethi (she gets to name the insect, too) or having to return home to attend an important life milestone for her daughter just to go tramping after a murderer. So I will often make a character’s to-do list:

(I’m going to say that from now on, I think four is a hard limit for a character’s plot-centered to-do list. I’m going to knock that down to two, maaaybe three if I have a story that has more than one character with POV and an arc. There is such a thing as too busy!)

These things create more scene cards in Scrivener. I’ll play with the whole board, arranging things in the order I think they happen, connecting scenes through cause, effect, and consequences, leaving gaps where I feel like I need them.

While I’m doing that, i’m still playing what if with my main characters, and that adds scene cards to the file as well. When I have around thirty or forty, i’ve got most of the story – so then I craft a solid scene-by-scene arc for the first quarter of the story, filling in more information in later scenes, but when I have the first quarter of the book, the middle scene sequence, the darkest moment of the story, the high-stakes, win-or-lose climax, and a glimpse of the character’s life Afterwards, I’m ready to start writing, and that’s a different process post for another day.

It’s been a long time since I published a craft blog post, but I haven’t quit talking about craft. I made a Patreon account, and I have posts there about things like

I do a new writing related post every month, available to patrons on a sliding scale basis – pick the level of patronage you can afford and you’re in!

Starting in August I am starting a Live Sessions tier, where I will explore a subject about the craft and business of writing on zoom, where you can ask more questions. Look for it then!

I write fantasy and romance novels. View all posts by clpolk

2 thoughts on “How I Abandon Organization While Planning a Novel”