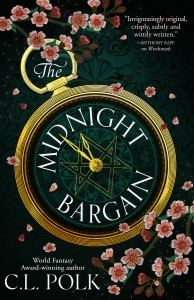 Beatrice Clayborn is a sorceress who practices magic in secret, terrified of the day she will be locked into a marital collar that will cut off her powers to protect her unborn children. She dreams of becoming a full-fledged Magus and pursuing magic as her calling as men do, but her family has staked everything to equip her for Bargaining Season, when young men and women of means descend upon the city to negotiate the best marriages. The Clayborns are in severe debt, and only she can save them, by securing an advantageous match before their creditors come calling.

In a stroke of luck, Beatrice finds a grimoire that contains the key to becoming a Magus, but before she can purchase it, a rival sorceress swindles the book right out of her hands. Beatrice summons a spirit to help her get it back, but her new ally exacts a price: Beatrice’s first kiss . . . with her adversary’s brother, the handsome, compassionate, and fabulously wealthy Ianthe Lavan.

The more Beatrice is entangled with the Lavan siblings, the harder her decision becomes: If she casts the spell to become a Magus, she will devastate her family and lose the only man to ever see her for who she is; but if she marries-even for love-she will sacrifice her magic, her identity, and her dreams. But how can she choose just one, knowing she will forever regret the path not taken?

Finalist in the 2021 Canada Reads Competition and the Nebula, Ignyte, and Locus Awards 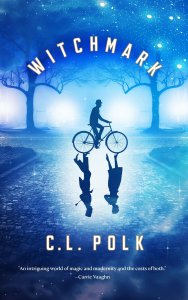 C. L. Polk arrives on the scene with Witchmark, a stunning, addictive fantasy that combines intrigue, magic, betrayal, and romance.

Miles Singer trades luxury, comfort, and his real name in exchange for surgical training and seven year’s service in Aeland’s Royal Army. Now home after a haunting, terrible war, Miles takes a job as a physician in Kingston’s cash-strapped veteran’s hospital, hiding the magical gift of healing that would land him in a witchcraft asylum, or worse–returned to the bosom of his power-hungry family.

His quiet life is shattered when an emergency lands a poisoned witch in his caseload, brought into his hospital by the most handsome man he’s ever seen–a man who, after uncovering Miles’ powers, proposes that they investigate the murder of Miles’ patient…together. As they follow the trail of the witch’s poisoner, the sister Miles fled returns to convince him to take his place among the noble families who control the fate of Aeland–as a magical battery and a second-class citizen.

As Miles resists his sister’s demands and his detective partner’s charm, Miles stumbles on the national secret that cost his patient his life…

Nominated for the Nebula, Lambda, Locus, Aurora, and winner of the World Fantasy Award

“Polk’s stellar debut, set in an alternate early 20th century in an England-like land recovering from a WWI-like war, blends taut mystery, exciting political intrigue, and inventive fantasy . . . The final revelations are impossible to see coming and prove that Polk is a writer to watch for fans of clever, surprising period fantasy.” —Publishers Weekly, starred review

“Polk has created an amazing new world with hints of Edwardian glamour, sizzling secrets, and forbidden love that crescendos to a cinematic finish. WITCHMARK is a can’t-miss debut that will enchant readers.” —Booklist, starred review

The Kingston Cycle, Book 2 – Stormsong.  Return to Kingston in this absorbing political fantasy that explores the consequences of the terrible revelations at the end of the Nebula and Lambda Literary Award nominated Witchmark.

Grace Hensley doesn’t have a spare moment. With terrible cyclonic blizzards threatening to bury Kingston, the favored daughter of disgraced traitor Sir Christopher Hensley is responsible for setting turbulent Aeland back in order–without letting its most terrible secrets escape.

When the woman Grace admired from afar threatens to turn those secrets into front-page news, Grace can’t just bury the truth undisturbed. She must face Aeland’s past and solve a problem that all her power – political and magical – can’t fix.

The Kingston Cycle, Book 3 – Soulstar. With Soulstar, C. L. Polk concludes her riveting Kingston Cycle, a whirlwind of magic, politics, romance, and intrigue that began with the World Fantasy Award-winning Witchmark. Assassinations, deadly storms, and long-lost love haunt the pages of this thrilling final volume. Look for it on February 16, 2021 from Tordotcom Publishing.

For years, Robin Thorpe has kept her head down, staying among her people in the Riverside neighborhood and hiding the magic that would have her imprisoned by the state. But

when Grace Hensley comes knocking on Clan Thorpe’s door, Robin’s days of hiding are at an end. As freed witches flood the streets of Kingston, scrambling to reintegrate with a kingdom that destroyed their lives, Robin begins to plot a course that will ensure a freer, juster Aeland. At the same time, she has to face her long-bottled feelings for the childhood love that vanished into an asylum twenty years ago.

Can Robin find happiness among the rising tides of revolution? Can Kingston survive the blizzards that threaten, the desperate monarchy, and the birth throes of democracy? Find out as the Kingston Cycle comes to an end.